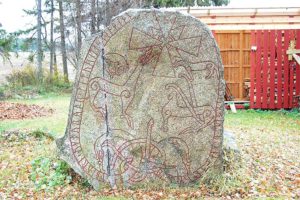 Fig. 1. The four figures on the runestone U 860 Måsta. Photo: Henrik Williams.

It has been a busy year at Uppsala Runic Forum, which partly explains the lack of new postings for a very long time. Much has happened, though. Donations to our runic activities have now reached over $40,000 and there is a testamentary bequest of app. one million dollars to support the establishment of a professorial chair of runology at Uppsala University.

Our sense of gratitude towards the generous benefactors is very deep indeed. The donations allow us to finance all kinds of things: runic events such as meetings, colloquia and excursions, the buying of important books, and the sponsoring of publications, research and public outreach.

The Chair project is the only guarantee for a continued strong runic environment in Uppsala, an important asset in international runology. Some of the cooperative activities we have participated in this year include the following.

Since January we are part of the three-year project “Everlasting Runes – a research platform for Sweden’s runic inscriptions”, based at the Swedish National Heritage Board. Marco Bianchi is one of the researchers in the project.

In April and May I visited The University of Central Oklahoma and did research on the runestones of that State. At the 107th Annual Conference of The Society for the Advancement of Scandinavian Study (SASS), in Minneapolis, I gave a paper on American inscription with Scandinavian runes and a public lecture on Viking women in runic times, the latter in cooperation with the American Association for Runic Studies (AARS).

After the summer AARS also co-organized a three-day Rune Round for a dozen Americans interested in runic studies, including several donors. The Deputy Vice-Chancellor hosted a luncheon for the visitors and the Vice-Chancellor also met with them. Runestones in and around Uppsala were demonstrated, runic items examined in the Uppsala University Coin Cabinet and runic literature studied in the University Library. One of the fruits of the Rune Round follows here.

Among the runestones inspected during the excursion in Uppland was U 860 Måsta, a carving by the skillful runographer Asmund Karason. The inscription consists of the typical memorial formula and a prayer: “Fastbjorn and Thorunn had this stone erected in memory of Ingifast, their master. May God and God’s mother help his spirit.” Asmund often adds a prayer to God the Son and the Virgin Mary, and sometimes he includes pictures of humans or animals in his carvings. On U 860 we find four animal-like figures below the central cross (Fig 1.):

According to Elias Wessén who published U 860 in Upplands runinskrifter 3 the meaning of the four figures must have puzzled observers a great deal, maybe intentionally. He thinks that Asmund may have seen similar animals in Christian pictures but not really understood what they signified and only used them decoratively to fill out empty space.

The meaning of the four figures must have puzzled observers a great deal, maybe intentionally

I have pondered the significance of these animals for decades and did voice my guesswork during the excursion. The only textual parallel I can think of is in the seventh chapter of the Old Testament Book of Daniel, verses 3–7. There, Daniel has a vision of four beasts. The first was like a lion that turns into a man, the second like a bear, the third like a leopard, and the fourth “dreadful and terrible” and ”diverse from all the beasts that were before it” according to King James’s Bible.

Pictures of living creatures on runestones are never very exact and it is often difficult to make out exactly what kind of animal we are dealing with. It may be imagination on my part but I do think that the animal down to the right looks like a feline with a man’s head. The tail between the legs, curving up over the body is at least typical of lions in contemporary Romanesque art. The animal up on the left could very well be a bear and the one to the right of it a leopard or some other predator. The head of the fourth animal, finally, looks very much like that of the ubiquitous runestone dragon, indeed a most dreadful and terrible beast.

Hence, pictures with a Biblical origin could very well have been used for similar purposes

If my identification is correct, what purpose would such a pictorial scene serve on a runic monument? I have previously (1999, p. 69 ff.) shown that pictures with a heathen origin could be used in a Christian context to symbolize the end of the World and hence the time to convert and repent. I have also demonstrated that ”that almost all of the established tenets of faith were known to runestone-time Christians in Scandinavia” (2016, p. 38). Hence, pictures with a Biblical origin could very well have been used for similar purposes. One certain example we have is the Nativity scene on N 68 Dynna. 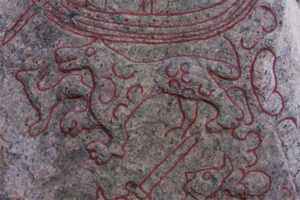 That Viking Age Scandinavians came in contact with exotic animals, most probably through pictures, is quite certain since we find not only lions and dragons but also as Anne-Sofie Gräslund (2014, p. 38) has shown peacocks, and on Vg 119 there is an animal that to me looks very much like a leopard (Fig. 2):

Books in the Old Testament were read in Viking Age England, from whence missionaries came to Scandinavia at the end of the period. Preserved are Old English poems on Genesis, Exodus, Judith, and Daniel. The vision of Daniel was popular also in Christian apocalyptic literature. In chapter 13, verse 2 of Revelations the vision is clearly inspired by the one in Daniel:

And the beast which I saw was like unto a leopard, and his feet were as the feet of a bear, and his mouth as the mouth of a lion: and the dragon gave him his power, and his seat, and great authority.

Provided that the scene on U 860 really does represent the vision in the Book of Daniel this would be a radical new line of research and would prove that the level of biblical insight was much greater in late Viking Age Sweden than previously suggested. On the side of the runestone U 595 Harg there is a scene which has been interpreted as Joshua and Caleb carrying a huge cluster of grapes on a pole between them, cf. Numbers 13:23. There is at least one other runestone scene where I suspect we may have a pictorial reference to an episode from Genesis, incidentally also on a monument carved by Asmund Karason, but that will have to be dealt with another time.

We wish the readers of this blog a Happy New Year!

Leopard, bear, lion and dragon, we are indeed drawing near the end, if not of the world then at least of the year 2017. We at Uppsala Runic Forum wish the readers of this blog a Happy New Year!