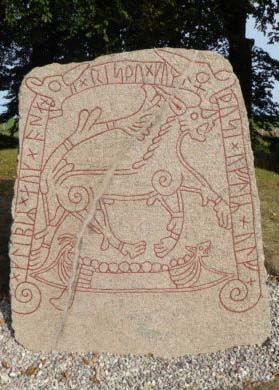 Recent postings have perhaps been too long. Now, in the middle of the summer vacations when all Swedes are at their laziest, I will make only a short posting, almost entirely relying on the research of a colleague, Associate Professor Magnus Källström, chief runologist at the Swedish National Heritage Board.

In October 2016 Magnus Källström paid a routine visit to the south of the Sweden to repaint some runestones. Not everybody knows that runic inscriptions in the southernmost provinces of Skåne, Halland, and Blekinge fall under the responsibility of both Swedish and the Danish runologists. This is because the area belonged to Denmark until 1658. One of these monuments, the stone at Tullstorp church (DR 371), is particularly interesting.

The pictorial elements on the stone are quite intriguing

For once, it is not the inscription which fascinates the most since it consists of a simple formula mentioning a man and a woman raising a memorial for a man, the relationship to whom is not specified. Perhaps it was made clear on another stone as the inscription mentions “these monuments”. 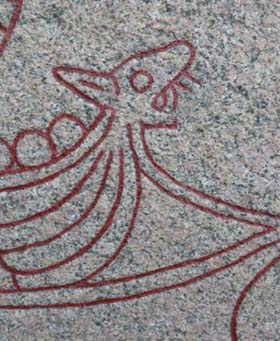 The pictorial elements on the stone are quite intriguing. They consist of a framing text band with curly ends, a ship below with an animal head-shaped prow, and a fierce canine above. In his Swedish-language account of this scene Källström convincingly demonstrates that the beast is Fenrir, the terrible wolf that slays the god Odin at the Final Battle. The ship below must be Naglfar, the likewise apocalyptic ship of the dead.

The end of the world is alluded to on some stones and could be inspired by both Biblical texts and Heathen mythology. The death of an individual was also a forecast of everything’s termination.

Here, I would only like to pay attention to a detail of the ship prow’s animal head: its “rat-like” teeth.

This may not have any particular significance, but I notice that an even more impressive set of needle-like teeth is found on the Grällsta runestone (Vs 27) in the province of Västmanland. The inscription is carved by one of my favorite runographers, the not-so-clever Litli (‘the small one’) after a father who “died on a voyage”, presumably in unknown parts. Let us all fare better this summer! 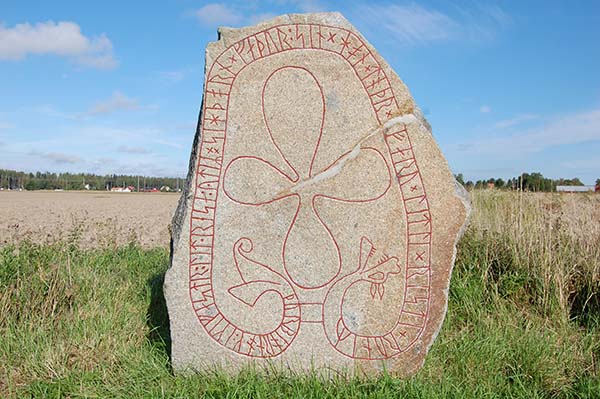 The Grällsta runestone (Vs 27). Photo: Henrik Williams, CC BY.

4 thoughts on ““Bite me” runestones”