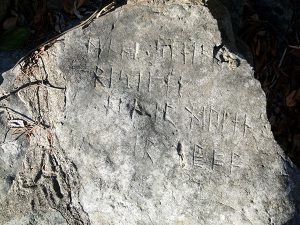 I wrote about American runestones, and I promised there would be more

After an extended hiatus, the Rune Blog awakes again. One reason for the longish pause is the fact that I organized the third Rune Round in August, this time in and around Sweden’s first capital, Sigtuna. As before, I cooperated with Loraine Jensen and Myrna Smith, board members of the American Association for Runic Studies. In late September and early October, I also made my 10th runic lecture, research and fundraising tour, this time to Minnesota, Iowa and Canada. I gave four lectures and examined four runic inscriptions, again in cooperation with Loraine Jensen.

Loraine, I am happy to announce, has been awarded a Fulbright Specialist position for her project “Viking Age Runic Studies: Education and Outreach”. She will spend March and April at Uppsala University, associated with the Department of Scandinavian Languages. Loraine will present her project on the Rune Blog later this spring.

Last but not least, there has been a major commotion in relationship to the reinterpretation of the Rök stone, the world’s greatest runestone. I was one of four authors of the article which has been downloaded over 7,500 times in less than four weeks (DOI: 10.33063/diva-401040). You can read more about it here, but do not miss the links with more information in the right margin at the bottom, including a link to the article itself.

For some years I had heard rumors that Prof. Einar Haugen had carved a runestone

In my April blog posting, I wrote about American runestones, and I promised there would be more. This time, I turn to the so-called Einar Haugen runestone. Einar Haugen, professor at Harvard University, worked at University of Wisconsin at Madison during the 1930s. For some years I had heard rumors that he had carved a runestone, and I started looking for information about it actively in 2014. The stone was supposed to be placed in Decorah, Iowa, where Luther College is situated, but I could find no information about it nor locate anyone in Decorah or elsewhere who knew anything about this supposed runic monument. Finally, I received a very helpful e-mail written on January 22, 2016 by Prof. John R. Christianson. He and his wife had bought their house from the parents-in-law of Einar Haugen. The following are excerpts from his e-mail, published with his permission:

“I discovered the stone after we had lived in the house for some time, and I made a rubbing of it, but that was many years ago. The next time Einar Haugen came to town — he and Eva always stayed with us when they visited Decorah — I took him out to the site of the inscription and told him that I had deciphered enough of it to see that it was written in Old Norse but could not make out all of it. He smiled as I told him this, and then, he looked at the inscription and read it out: iak einar hauken ristede runer, ar 1936, or words to that effect. [—] Einar Haugen met his wife, Eva Lund, when she was working as a librarian in Koren Library at Luther College and he was there to do research. H[is] parents-in-law were Lully and Einar Lund, Norwegian journalists who came to the USA when Einar Lund lost his position on a Norwegian newspaper. [—] The Lunds contracted with a Norwegian-American builder named Alstad to build their house at 110 Pleasant Hill in Decorah in 1931. The Lunds drew up the plans on the model of the house they had built in Kongsvinger. [—] After Einar Lund’s death in 1963, Lully Lund sold the house to Tom Anderson, who sold it to us in 1967. We sold it in 2012 to Alan Sand, who is the present owner.” 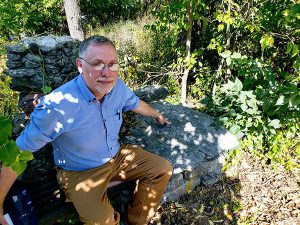 The runestone by the hearth. Photograph by Loraine Jensen 2019.

Mr. Sand kindly gave us permission to inspect the stone on his property. On September 30, 2019 I examined a runestone (see photograph above) with the assistance of Loraine Jensen on the estate belonging to 110 Pleasant Hill, Decorah. The inscription consists of four lines on a light grey, foot-high type of flagstone, set horizontally on the right side of the hearth of an outside fireplace near the driveway to the house. The runes are app. 1.5 inch high. The reading is as follows:

, also used on the Kensington runestone.

This may not seem like a sensational runic inscription, so why am I making it the topic of a Rune Blog post? One reason is the need for some sort of inventory of runic inscriptions (and would-be inscriptions) in North America. I made the case for such a catalogue in March 2018. Nevertheless, there is another motive. 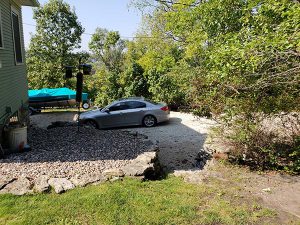 The driveway to 110 Pleasant Hill. The fireplace with the runestone is situated right behind the car. Photograph by Loraine Jensen 2019.

You never know what happens to a runic object in the future. A modern artifact with runes can get lost and be thought ancient, for example. This happened to the Waukegan (or Winnetka) horn, found in 1952, sticking from the ground in a town north of Chicago. It was dated to the 14th century but conclusively proven to be an early 20th century piece. Perhaps I will write a blog post about it someday.

The Decorah stone is, as can be seen in the pictures, not in great shape as the surface has begun to crumble. Some day in the future, perhaps decades or centuries from now, a fragment of the inscription may be found and the history of the stone forgotten by then. Unless every runic item is properly documented it may cause serious misunderstanding about its origin and meaning.

By working on my inventory and eventually making it available in some form, I hope to avoid that happening, at least to the North American inscriptions that I am aware of.

One thought on “The Decorah runestone in Iowa”