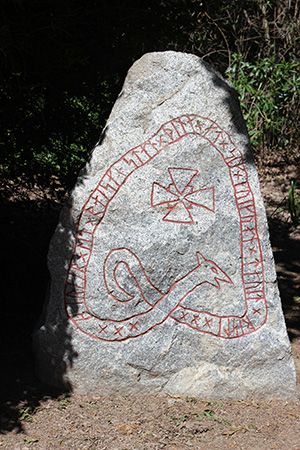 On this blog I have written several posts about Runic inscriptions in the United States, the Kensington stone in Minnesota, the Mustang Mountains stone in Arizona, and the North Tisbury stone on Martha’s Vineyard in Massachusetts. I have also outlined a project on a corpus edition of runic inscriptions in North America, to have been completed during a sabbatical year. Unfortunately, I was not among the lucky 10 % of the applicants to get the sabbatical. Nevertheless, that will not stop me from continuing to research and write about this fascinating phenomenon.

It depends on how you count, of course

Someone just asked me how many runestones there are in North America. It depends on how you count, of course. Out of the 100 plus objects with claimed runic inscriptions that I have somewhat reliable information on, 34 (so far) definitely have runes carved in stone.

Among these, several are on smaller pieces and would not qualify as proper runestones or runic rocks. And at least 15 are acknowledged or proven recreations with no claims of ancient authenticity, such as the AVM stone in Minnesota, carved by university students as a hoax; the Escalon stone in California; Muir Knoll or Brittingham stone in Wisconsin; and the Vanier Park stone in Vancouver.

The three last mentioned are all commemorative monuments erected in recent times, the first by a son as a present to his father, the second in memory of a generous benefactor, and the third to commemorate the 100th anniversary of the City of Vancouver. These are typical reasons for many contemporary American runestones.

To me as a runologist all runic objects are of interest

To me as a runologist all runic objects are of interest, although I have to express a preference for the ones that are not immediately obvious as modern recreations. One of my particular favorites is the Barrett Lake stone in Minnesota. This heart-shaped stone was “found” in 1944 by the Swedish-American farmer Victor Setterlund, and it bears the somewhat surprising message ‘Year 1876. 4 maidens set camp on this hillock’. 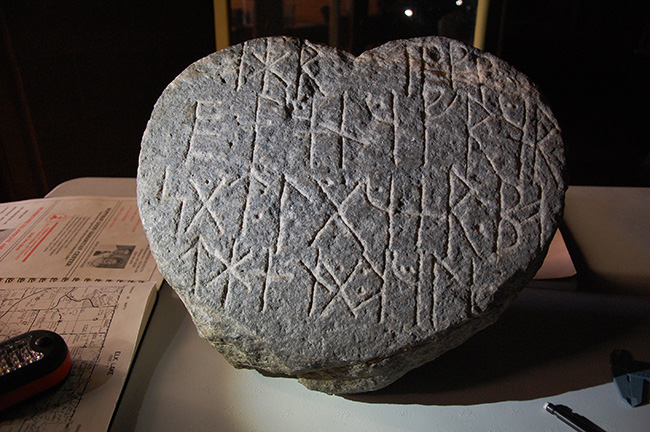 The runes used are those known from the Kensington stone, and Barrett Lake is only 14 miles south of that place. The year was first misread as 1362, the self-dating of the Kensington stone, although nobody seems to have seriously considered the Barrett Lake stone to be authentic. When Victor Setterlund was finally asked if he had indeed carved the stone himself he admitted it, and when asked why he had not said so to begin with he simply replied that no one had asked him…

The runes used are those known from the Kensington stone 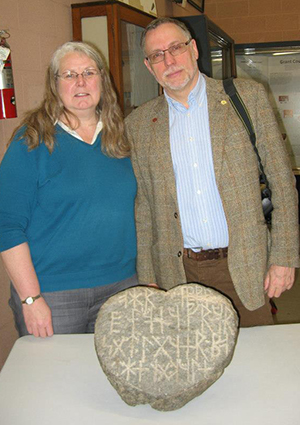 At first the stone was associated with the nearby county seat Elbow Lake, but since the hoax was made public the name Barrett Lake Stone has stuck. It is, however, exhibited at the Grant County Museum and Historical Society in Elbow Lake. In 2015 I was able to examine the monument there, with the assistance of the museum’s friendly Director Patricia Benson (see the photos above and to the right). A couple of local inhabitants also shared information about the eccentric rune carver Victor Setterlund.

Another stone that is not among those officially acknowledged to be carved recently is the Mahone Bay stone in Nova Scotia. It was first reported in 2012 and created quite an Internet buzz, at least until someone pointed out that it is an obvious copy of the Ramsund cliff monument (Sö 101) in the Swedish province of Södermanland.

The Mahone Bay inscription is not a complete replica of its Viking master pattern, as the latter is huge and its design did not fit. Nevertheless, there is enough of both text and pictures to make the identification evident. So I guess that would make it 16 obviously “re-created” runestones.

More runes in America to come!

One thought on “American runestones”