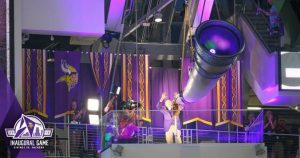 Last Sunday it was time for the Minnesota Vikings to play the first home game in their new stadium. They won their fourth straight game (two pre-season) this fall. As announced in my first blog post, the game program Playbook will contain a series of brief articles on Viking myths. The inaugural installment dealt with the great horn sounded at the start of every home game. I can reveal a little secret that I discovered when I visited the Stadium in late June. The Gjallarhorn is no longer blown, as the mechanism in the old horn was too unreliable. Now, the blast is triggered from the sound booth when the honorary Heimdallr sets lips to the mouth piece.

The Playbook installments will sooner (I hope) or later appear on the Vikings homepage, in an expanded version. I honestly believe that cultivating myths of the Gjallarhorn kind can strengthen team spirit if it is done right. Entertainment can be also educational, provided it is founded on facts and not used to foster prejudice. Playing with Viking emblems is not a completely innocent game, as is evident from the abuse of such phenomena by extremists. Nevertheless, the way to set this right is to reclaim the symbols in an informed and non-prejudiced environment. Only by truth can falsehoods be exposed.

As a memory tool, each runic character had a designation

Runes have yet to appear officially in a Minnesota Vikings context, so I cannot claim that runic influence has contributed to the successful start of the season. I have, however, dabbled a bit with runic magic, drawing runes from the older Futhark on a copy of Playbook. As a memory tool, each runic character had a designation. These “rune names” began with or contained the speech sound the rune represented. The f-rune was called fee and so on. This has been taken by modern, would-be runic magicians as a pretext to let the rune names symbolize a wider significance and to be used in fortune-telling. I should make it very clear that there is no clear evidence that individual runes were ever used this way.

As long as you remember that this is pure play, pretending to draw magical runes is actually fun. It also shows that the human mind is capable of seeing patterns even when none exist, as in a list of arbitrary designations for letters. The runes I chose were n, j, and f, standing for ‘need’, ‘good year’, and ‘money’, respectively. So far it seems to have worked. The Minnesota Vikings need a good year to prosper, and so does Uppsala Runic Forum.