This first blog posting is dedicated to the American football team Minnesota Vikings. They have just inaugurated a new stadium. At each in-season home game, every spectator will be given a copy of the program Playbook. It will contain a series entitled ”The Truth Behind” (written by me) on topics that separate “fact and fiction to identify the real-life happenings that are sometimes masked by storied Vikings lore”, as it says in the introduction. Much of that lore concerns the role of runes in Viking society and more specifically, the role of runes on the North American continent. 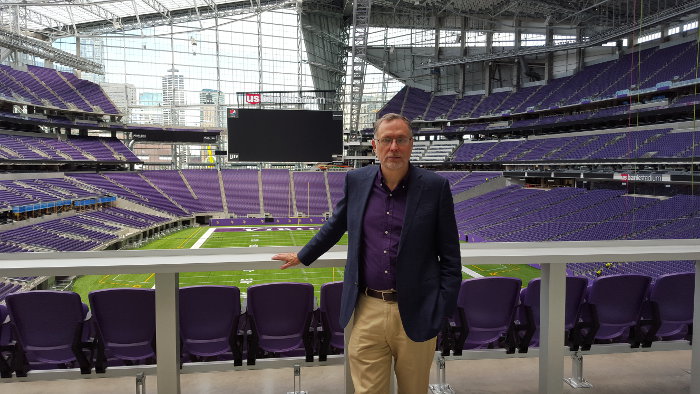 It is a privilege to be allowed to appear in such a widely spread publication and to reach perhaps as many as 66.000 readers every game. It has been a pleasure to cooperate with Brett Taber on this project. Brett is the director for Youth Marketing & Social Responsibility. He contacted me last March because the team recognizes that its name and brand promotes a number of stereotypes on Vikings history and culture, which they want to rectify but also embrace in a constructive way by informing the public about the truth behind the myths.

Not only will there be the series in Playbook, the team also uses runes in different contexts. On the prow of the great Viking ship in concrete, standing outside the stadium, there will be runic inscriptions with the team’s motto, translated into Old Norse, the language of the Vikings themselves. The task of producing these texts was given to me, ensuring that everything is correct and as authentic as possible. I look forward to a runic revival in Minnesota and I hope the Vikings have a successful season!

2 thoughts on “Runes and the Minnesota Vikings”