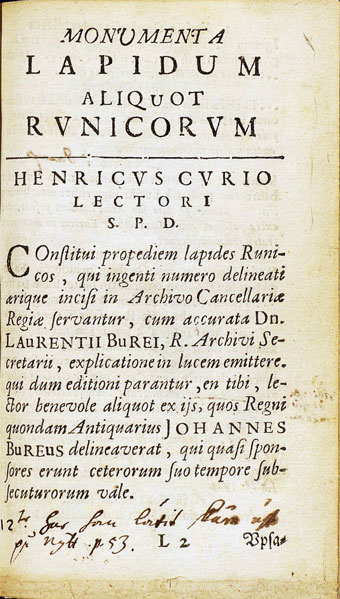 The title page of Verelius’ appendix Monumenta lapidum aliquot runicorum. The picture is taken from the digitised copy at the National Library of Sweden (Kungliga biblioteket, Public Domain).

Olof Verelius was born on February 12, 1618 and would have celebrated his 400th birthday today had he lived. He had a rich life, travelled widely and held many high positions, of which the finest in my book was as Uppsala University’s first professor of Swedish antiquities, a predecessor of the chair in Scandinavian Languages. Verelius has the honor of having published the very first edition of an Icelandic saga in the original language, Gothrici & Rolfi Westrogothiæ regum historia in 1664.

However impressive this is, that is not why the Rune Blog pays attention to Olof Verelius, but because his edition was followed by ”an appendix comprising 49 woodcuts by Johannes Bureus and some introductory pages with transcriptions and Latin translations of these inscriptions”, as Magnus Källström writes in a recently published article in Scripta Islandica. This is the first widely available publication of runic material in Sweden and as such a milestone.

Verelius himself had nothing to do with the runic appendix as far as we know, but he did become interested in runes early on and comments on runestones in his editions of Icelandic texts. In the 1672 edition of Hervarar saga, for example, he has the first published illustration of the Salmunge stone (U 519) which he thought contained the sensational ending: “and he has consecrated death runes for the god Odin”. (I may return to this inscription in a future Rune Blog.)

The Salmunge stone was also included in the first attempt to write a handbook of runology, Manuductio compendiosa ad runographiam Scandicam antiqvam, recte intelligendam. En kort vnderwijsning Om Then Gambla Swea-Götha Rvna-ristning published in Uppsala in 1675. As a matter of fact, a substantial part of the book is devoted to the long-standing quarrel with the Danes about whose runes, runestones and runologist were the best, but eventually Verelius settles down and gives a good deal of useful information, if not very advanced and not always correct, of course. Nevertheless, this is an impressive feat since there is yet to be published a really good runic handbook…

… but eventually Verelius settles down and gives a good deal of useful information, if not very advanced and not always correct, of course

Olof Verelius died on January 3, 1682 and was interred on February 9 in Uppsala’s Old Graveyard, of which he became the first inhabitant. His vault is covered by a small mound on which is set a runestone, erected in 1698 by his colleague Olof Rudbeck, Sr. 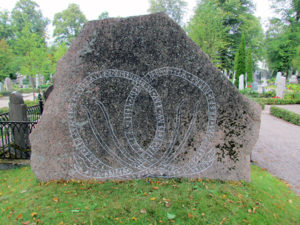 There is such a thing as posthumous fame. In 1730 was published Epitomarum historiae Svio-Gothicae libri quatuor. It contains a history of Sweden by Verelius, generally admired for the elegance of the Latin it was written in, but evidently by its author not considered good enough to print. That did not stop an admirer, Per Schenberg, from doing just that almost half a century after the writer’s death.

The book contains a useful bibliography of Verelius’s works but also the poem which Olof Rudbeck had written in connection with the funeral. It is quite entertaining, but partly because it may be the worst ever written in Swedish. On the second page of this lyric drivel, Verelius is compared to a “runestone on which his neighbors have broken their bones”. This is an obvious reference to the academic fights Verelius was involved in. God save us all from such an obituary!