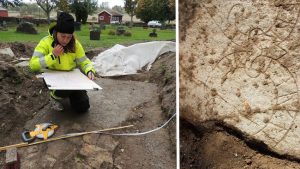 The reports are still preliminary, but it seems the six feet tall monument is still as intact as it was hundreds of years ago.

Sweden has around 2,500 runestones from the Viking Age. At least, that is how many we know of. Around the countryside many hundred of these monument still grace their original sites. Through them we get a unique insight into the ancient Swedish landscape. Through them we can sometimes reconstruct the existence of thousand-year old roads, fords and bridges. Many other runestones have been moved, hundreds of years ago or more recently. A great number are found built into churches or on their cemeteries. Were these memorials there before the churches or have they been transported from the surrounding area to be used in the new buildings? This is one of the many mysteries yet to be solved.

Almost 500 runestones from Viking Age Sweden have been lost since they were first recorded.

Almost 500 runestones from Viking Age Sweden have been lost since they were first recorded, usually in the 17th century. Fortunately some are found again, one a year or so and often when churches are renovated or work is done in the cemetery. This very thing happened just the other day at Hagby church, eight miles west of Uppsala. The runestone U 874 was noticed and depicted several times in the 17th century and again as late as in the 19th. At the time, it was used as threshold for the door into the church porch. But the church was partly torn down in the late 1830s and the runestone has not been spotted since. A rumor  claimed it had been dumped in a nearby mill pond, but this turns out not to be true. Instead the stone moved hardly at all, just was covered by soil.

This brings up Sven B. F. Jansson’s famous dictum: “A stone is always damaged at its most interesting point.” 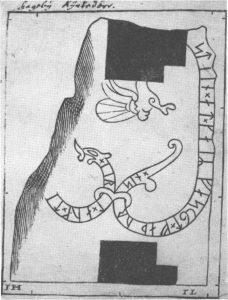 U 874. A 17th century woodcut by Johan Hadorph and Johan Leitz, printed in Johan Göranssons Bautil.

The reports are still preliminary, but it seems the six feet tall monument is still as intact as it was hundreds of years ago. Unfortunately, a big piece was already missing then. Nevertheless, we can reconstruct the basic meaning of the text which reads: “Jarl and … … the stone in memory of Geirfast, their father.” After “and” followed a second name starting with the runes ti, interrupted by the break in the stone. I am pretty sure that more names followed. It is not uncommon for three, four or even five children to commemorate their parent.

There are exciting things about the stone’s recovery.

We may now inspect the break in the stone to see if there are any remains of the third rune in the second son’s name. Before, there were two possible interpretations, Diarf and Tidkumi, which would both be written with ti in the beginning. There is no a-branch visible in the photographs that I have seen. If the end of one can be discerned in the break, we would have an indication that Diarf (‘the bold’) is the option to be preferred. Sadly, it seems as there is not enough left to decide the matter. This brings up Sven B. F. Jansson’s famous dictum: “A stone is always damaged at its most interesting point.”

The carver of U 874 has been surmised to be Fot, perhaps so named because of a handicap to his foot or leg. He was a great carver though, and now when we can see the stone “in the flesh”, it is even more evident that Fot is indeed the carver.

What kind of avian beast is this? My guess would be a peacock.

Last but not least: On the stone we could see a bird, although its head was obstructed by the portal. This will now be uncovered so that we can see the fowl in all its glory. What kind of avian beast is this? My guess would be a peacock. Prof. Anne-Sofie Gräslund writes: “Due to the popular belief that the flesh of the peacock never rots, it had been an important symbol of immortality for ancient Greece and Rome. The concept was taken over by the Christians, and in the Catholic Church the peacock is still a symbol of immortality, innovation and resurrection.”

This dirty and damaged runestone was once the glorious memorial for a cherished father, raised by his children with a hope to see him again in Paradise.

One thought on “A prodigal runestone has returned!”