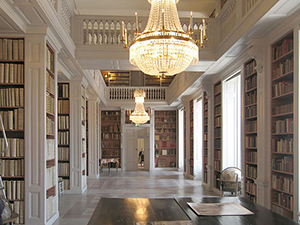 A month ago, the second Rune Round took place.

Last year a dozen Americans came to Uppsala to go on a three-day tour to inspect authentic runic inscriptions, from as old as the 5th century to runic literature from the 17th to 19th centuries in the University Library.

This year, nine of them returned for a two-day visit, the first of which was devoted to a tour in the Vallentuna area. This region is so thick in runestones that it is called The Runic Kingdom. It deserves this honor since we know 43 runic inscriptions from Vallentuna Parish alone.

We started at Orkesta kyrka with its many and fascinating runestones, one of which commemorates a man who had taken three payments in England from the king or others, as compensation for not plundering and raping the country.

The next stop was the Granby cliff face inscription (se photo below). It is one of the largest runic carvings we have and bears a lengthy text with some fascinating names, including Johan (John) and Varghǫss. The first provides evidence of Christian influence. The second means ‘wolf-grey’ and gives insight into what features that were taken into account in Viking-Age name giving.

The 2018 Rune Rounders in front of the Granby stone (U 337). Photo: Sonia Pereswetoff-Morath.

Names are important and not arbitrary, even though Juliet in Shakespeare’s play seems to have thought so: “What’s in a name? That which we call a rose by any other word would smell as sweet.” One of the most intriguing and difficult tasks for runologists is to ascertain exactly what people were called. Every time I succeed in identifying a previously misinterpreted name I feel I have rescued a person’s identity.

He had at least four great runestones erected after himself

The Bällsta stones at Arkil’s tingstad are important sources to the institution of the thing assembly. At Vallentuna church there are several Viking-Age runestones and a couple of medieval inscriptions, too. One gives evidence of the establishment of a new thing assembly, by the local head honcho Iarla-Banki. He had at least four great runestones erected after himself, perhaps because he did not trust his heirs…

The final stop was at the three runestones at Broby, all raised by the same family. One of the inscriptions reads: ‘Astrid had these stones raised in memory of Eystein, her husband, who sought Jerusalem and met his end up in Greece.’ If he died on the way there or back is not clear but I think he made it to the Holy Land.

This quite small sample of runestones gives us deep insights into the Viking Age and its social, religious, gender, legal and cultural history. Runic inscriptions are a formidable (and fun) source of knowledge.