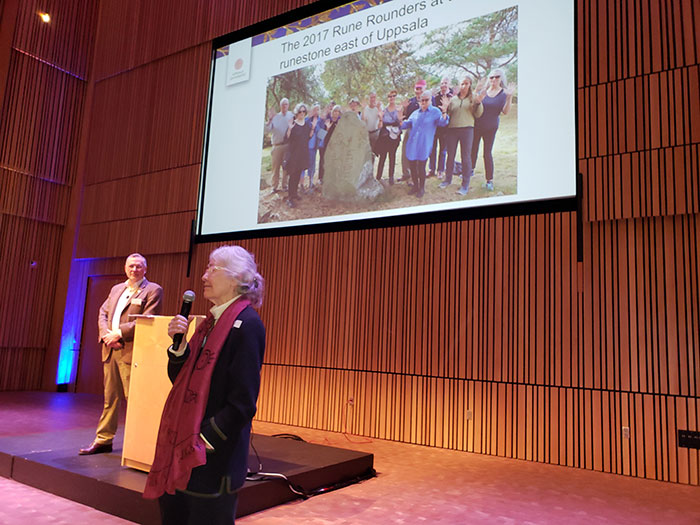 Myrna Smith speaks in support of a runic chair at Uppsala University.

In my recent Rune Blog posting I mentioned the upcoming runic visit to California and Seattle. The former went well and so would the latter, I expect, if it had not been for the snow storm that kept hitting the Pacific Northwest. Washington State just isn’t as used to snow and ice as the Midwest, where I have experienced the worst blizzards, or even Scandinavia for that matter.

Washington Gov. Jay Inslee declared a state of emergency, schools closed, and the 170 that had registered for the VIP event very capably arranged by my Uppsala University colleagues at the Development Office dwindled to 50. Those that came seemed to enjoy the program with welcoming remarks by Nordic Museum director Eric Nelson, Uppsala University Deputy Vice-Chancellor Anders Malmberg (who braved a pretty bad cold), Professor of North American Studies Dag Blanck, who spoke about Vikings and America: An Important Factor in Understanding Relations Between the United States and Scandinavia, and finally myself with a talk entitled “Vikings Begin – with Runes”. I ended with presenting the case for support of runology and our benefactress Myrna Smith filled in with a personal plea.

In my brief talk I touched upon the possibility of there being authentic runic inscriptions from the Viking Age in the United States. On the small island No Man’s Land is found a boulder with runes, mentioning the name Leif Erikson. The shape of the runes, the non-Icelandic orthography and the roman-style dating MI (= 1001 AD) all combine to prove this to be a modern monument, I would say about a hundred years old or so.

Closer to my Washington audience might have been the alleged runic rock near Spokane (pronounced as can, not cane). It turns out that Olof Opsjon, a self-styled professor, really claimed to have found ideographs that he called runes, although as a Norwegian-American he should have known better. 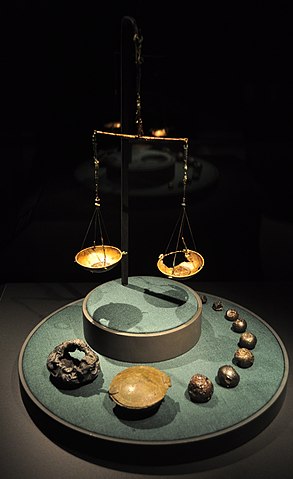 The talk connected with the Uppsala University exhibition The Vikings Begin, beautifully displayed in the new museum. No runic inscriptions are included but some objects were very suggestive anyway, including a set of delicate scales. They made me think of the fascinating inscription on a contemporary copper scale box from Sigtuna. It bears the text ‘Diarfr [the brave one] got from a man from Samland / Semgallen these scales in(?) …-land. And Vermundr colored these runes. The bird tore apart the pale thief: (One) noticed the increase in the corpse-cuckoo.’ The last part is a half-stanza in the courtly meter dróttkvætt, describing how a raven grows fat when devouring a thief. Presumably, this is a warning to or curse on anyone trying to steal the merchant’s goods.

Yet another reminder that the world of runes is rich beyond belief.

4 thoughts on “The Vikings Begin – with Runes”