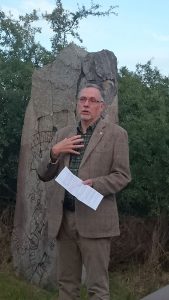 Henrik Williams in front of U 467. Photo by Lena Renström

Knivstabibliotekets vänner, The Friends of the Public Library in Knivsta (south of Uppsala), have supported this institution since the early 1990s. They offer a rich program, mainly in the form of visits by authors who talk about their books. The very first program offered started with a runic excursion in the immediate surroundings of Knivsta. This month, it was time for the sixth such excursion, and amazingly quite a crowd turned out once again to hear about the runestones in their neighborhood. This time we visited U 473 and U 472 Skottsela (Skottsilla); U 466, U 467, and U 468 Tibble; and finally U 462 at the vicarage in Vassunda.

Yet, no runic monument is worthless or boring

Several of these runestones are damaged and two (U 466 and U 468) bear inscriptions without recognizable words. Yet, no runic monument is worthless or boring. U 467 is signed by Thorbiorn, a runographer particularly active in the area. However, he has also carved stones for the Frisian Guild in Sweden’s first “capital city”, Sigtuna. He may have been instrumental in propagating Christianity outside Sigtuna.

In the Scandinavian Runic-text Database, U 467 is undated. Already in 1999, however, Magnus Källström dated the monument on the ornamental style of its runic animal. Enough of the head remains to determine that the snake belongs to the stylistic group Pr1 (1010-1040 AD), a very early runestone for the area. 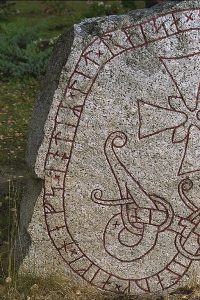 On U 472 the names Dragmáll and Eiki-Nefr are found. The former is a nickname for a person with drawling speech and the latter for his son-in-law who must have had a nose looking like oak bark. The names are not very pretty, perhaps, but just like today it was more important to be noticed than anonymous…

5 thoughts on “Runic excursion in Knivsta”