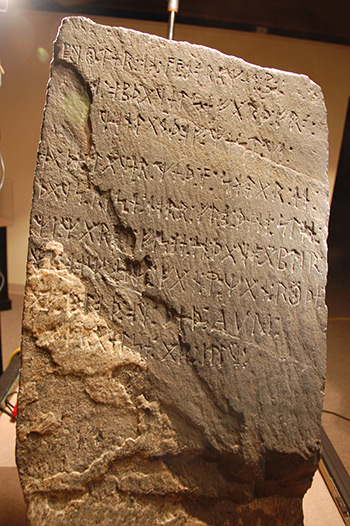 The story on the Kensington runestone (KRS) is one of its most amazing aspects. A translation of it reads:

Eight Götalanders and 22 Northmen on (this?) exploration voyage from Vinland westwards(?). We had a camp by two sheds(?) one day’s voyage north from this stone. We went fishing one day. After we came home (we) found 10 men red from blood and death. Ave Maria(?) may save from evil. There are 10 men by the sea to look after our ships, fourteen days’ journey from this island/peninsula. Year 1362.

Who could come up with that unless the inscription really dates from the 14th century? Anyone claiming it to be a late 19th century text needs to explain how the author(s) invented this narrative. Well, it turns out the answer has been with us for some time.

There is in fact a rather well-known model, the saga of the Greenlanders. This was pointed out by Dr. Thorgunn Snædal, formerly the chief runologist of Sweden’s National Antiquities Board, in a 2003 e-mail to her colleague Prof. James E. Knirk, the recently retired head of the Runic Archives in Oslo. He shared the discovery during a presentation on May 12 last year at the SASS conference in Minneapolis, on which presentation this blog post is based with his consent.

The Greenland Saga contains the story of how Norsemen first reached Vinland on the shores of North America around the year 1000, and it was retold orally until it was written down, probably in the 13th century. Best known is Leif Erikson, but there were other expeditions, including one led by his brother, Thorvald. The visit by the Norsemen is an historical fact, although the tale grew in the telling. This is what the saga has to say about Thorvald (according to a translation by A.M Reeves, N.L. Beamish and R.B. Anderson; the whole story is found here):

Now Thorvald made ready for this voyage with 30 men, and took counsel thereon with Leif his brother. Then made they their ship ready, and put to sea, and nothing is told of their voyage until they came to Leif’s booths in Vinland. There they laid up their ship, and spent a pleasant winter, and caught fish for their support. But in the spring, said Thorvald, that they should make ready the ship, and that some of the men should take the ship’s long boat round the western part of the land, and explore there during the summer. To them appeared the land fair and woody, and but a short distance between the wood and the sea, and white sands; there were many islands, and much shallow water. They found neither dwellings of men nor beasts, except upon an island, to the westward, where they found a corn-shed of wood, but many works of men they found not; and they then went back and came to Leif’s booths in the autumn. (…)

Then went they to the ship, and saw upon the sands within the promontory three elevations, and went thither, and saw there three skin boats (canoes), and three men under each. Then divided they their people, and caught them all, except one, who got away with his boat. They killed the other eight, and then went back to the cape, and looked round them, and saw some heights inside of the firth, and supposed that these were dwellings. After that, so great a drousiness came upon them that they could not keep awake, and they all fell asleep. Then came a shout over them, so that they all awoke. Thus said the shout: “Wake thou! Thorvald! and all thy companions, if thou wilt preserve life, and return thou to thy ship, with all thy men, and leave the land without delay.” Then rushed out from the interior of the frith an innumerable crowd of skin boats, and made towards them. Thorvald said then: “We will put out the battle-skreen, and defend ourselves as well as we can, but fight little against them.” So did they, and the Skrælings shot at them for a time, but afterwards ran away, each as fast as he could. Then asked Thorvald his men if they had gotten any wounds; they answered that no one was wounded. “I have gotten a wound under the arm,” said he, “for an arrow fled between the edge of the ship and the shield, in under my arm, and here is the arrow, and it will prove a mortal wound to me. Now counsel I ye, that ye get ready instantly to depart, but ye shall bear me to that cape, where I thought it best to dwell; it may be that a true word fell from my mouth, that I should dwell there for a time; there shall ye bury me, and set up crosses at my head and feet, and call the place Krossaness for ever in all time to come.” Greenland was then Christianized, but Erik the Red died before Christianity was introduced. Now Thorvald died, but they did all things according to his directions, and then went away, and returned to their companions, and told to each other the tidings which they knew, and dwelt there for the winter, and gathered grapes and vines to load the ship. But in the spring they made ready to sail to Greenland, and came with their ship in Eriksfjord, and could now tell great tidings to Leif.

As you can see there are striking resemblances (marked in bold style in the first paragraph) between this story and the one on the KRS, the 30 men (KRS 8+22), the mention of Vinland, westwards, a ship, a voyage, fishing and exploration, as well as an island and a shed. The killing of ten men and the prayer(s) have no exact correspondence, rather the Norsemen kill the natives. But Thorvald is killed and they raise a Christian cross for him. It is pretty clear that this is the narrative that must have inspired the author(s) of the KRS text, who probably knew it through reading a translation into Scandinavian (or possibly English) of which there were a number at the time.