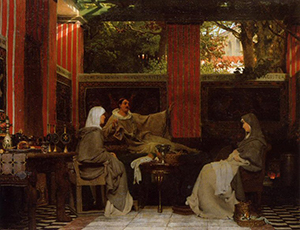 Today, December 14, is the international day of Runology (unilaterally declared by me, five years ago). I take it for granted that all readers of this blog will celebrate it in a proper runic fashion, whatever that may be.

Why did I pick this particular day? Well, December 14 happens to be the feast day of Saint Venantius Fortunatus (ca. 530 – ca. 600/609 AD). He was born outside Venice, became bishop in France and was a famous author of his time. He was canonized, and if runology has any guardian saint he is the one.

Venantius Fortunatus made the first ever (external) observation on the use of runes, and thus qualifies as the first runic researcher. To a friend who was a slow correspondent he wrote: Barbara fraxineis pingatur runa tabellis. Qvodque papyrus agit virgula plana valet. ‘You may also paint barbaric runes on tablets of ash wood; what papyrus achieves a smoothed wooden staff can do as well.’

We know runes were carved on ash wood, on the lance shaft from Nydam, for example.

Venantius Fortunatus’ poem Pange lingua gloriosi is used as a hymn in many traditions, including The Book of Common Prayer (number 97) and the Swedish hymnal, where it is split in two as number 147, and 456.

This is also the month of Christmas. On Christmas Eve itself our Växjö runologist, Per Stille, celebrates his 70th birthday. Uppsala Runic Forum wishes him Many Happy Returns of the day, and encourages everyone to send him a kind thought or even a congratulation (per.stille at lnu.se). 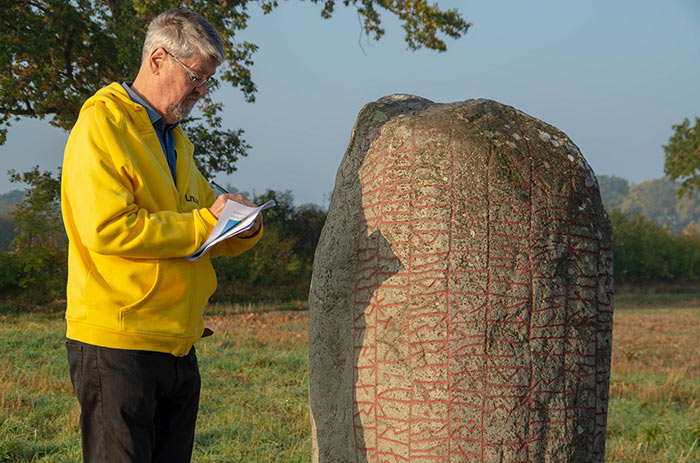 Per Stille and the Karlevi runestone (Öl 1). Photo: Marco Bianchi, CC BY.

Christmas also means presents, and I would be remiss if I did not thank all those people who have contributed so generously to runic research in the past year. In no particular order I would like to mention Sue Carlson (New York) and Nils Hasselmo (Houston), as well as Barb Swadburg and Jim Kurle, Loraine Jensen, Eleanor Dahlquist and our constant benefactress Myrna Smith (all Minnesota). Not only do these gift make a tremendous difference, the very thoughtfulness of the donations give us real hope for a runic future.

The Vikings’ Christmas was called jul, as it still is in Scandinavia

As this is the last blog post of the year, I would like to end it with a bit of runic education. The Vikings’ Christmas was called jul, as it still is in Scandinavia. There are personal names in runic inscriptions with the first element jul-: Julfast and Julger, for example. Lena Peterson interprets the first element of these names as being derived from the word igull ‘hedgehog’. The name Juli, known from two runestones, would then be a short form of such names, perhaps a nickname.

It pains me to contradict such a great authority on names, and my cherished former supervisor to boot, but in the spirit of the season I feel obliged to propose that we are instead dealing with a name element jul-, English yule ‘Christmas’.

A woman named Julfrid is mentioned on a medieval runic lead plate in the Dominican friars’ convent in Skänninge, in the province of Östergötland. Inspired by her name, I wish you all peaceful holidays in somewhat antiquated English: Yule Frith! 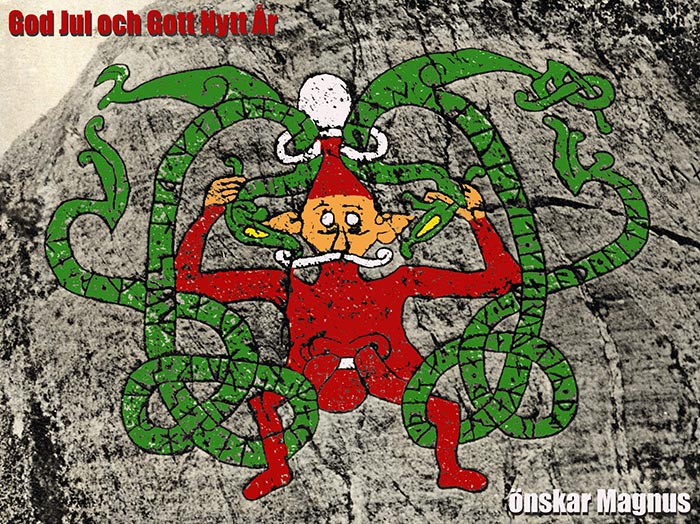 A runic Santa Claus Christmas greeting from my esteemed colleague Magnus Källström (used with his permission), inspired by the cliff inscription Sö 175 at Lagnö on Aspö in Lake Mälaren.

One thought on “Happy International Day of Runology!”