Uppsala universityUppsala Runic ForumThe Rune BlogFrom Isis to Jesus: Runology in the 17th and 18th centuries and how it affects us 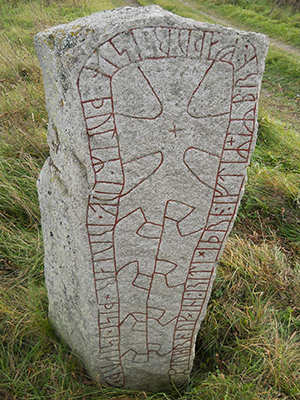 Early runologists were not as bad as some think they were …

In today’s scientific runology the efforts by early runic scholars are not often extolled, at least not as far as the interpretations of the inscriptions themselves are concerned. That may be a mistake on our part.

How early runologists dealt with difficult inscriptions has consequences for today’s runology. One must respect or at least understand that early scholars were up against a formidable task with very poor preparation. That they succeeded at all is more astounding than the fact that they often failed. We build on their success in our gradual decoding of the runic texts. But even their failures can affect us.

I hope that the recounting of how a certain runic inscription has been deciphered throughout the centuries will show that early runologists were not as bad as some think they were and we not so much better as we think we are. As my example I will choose the stone from Salmunge (U 519). It still stands today at or near its original location. Only five feet tall and 1.5 foot wide it is not very impressive (see illustration).

… and we are not so much better as we think we are.

The eminent runologist Elias Wessén writes (in translation): ‘Few runestones have stirred such interest and expectations during the 17th and 18th centuries as the Salmunge stone. The reason for this are forms, enigmatic and difficult to decipher, above all the final words of the inscription, isikuþ.’ Later, however, very little attention has been given to this monument.

Johannes Bureus, the father of runology, visited the Salmunge stone in 1638. Except on one important point the differences between Bureus’ reading and the current one are miniscule, only the sequences read by him as alf ‘elf’ instead of iuk ‘cut’ and asi instead of isi are not. His confusion is probably not due to any real difficulty in deciphering the runes but to an inability to realize their context. The misreadings were to plague future comprehension of the text. 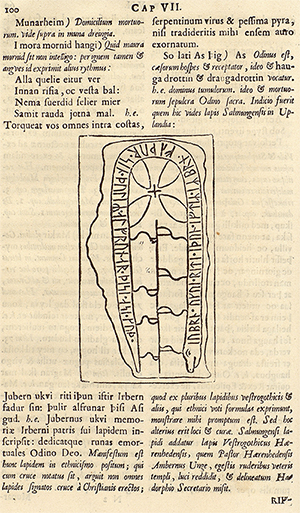 Olof Verelius’ interpretation of the Salmunge inscription in Hervarar saga (1672). The picture is taken from the digitised copy at the National Library of Sweden (Kungliga biblioteket, Public Domain)

In 1672 Olaus Verelius interpreted the end of the text as ‘he has consecrated death runes for the god Odin.’ Later he comments: ‘Among speech runes are also included elf runes, which they have inscribed on the gravestones in memory of the souls of the deceased, and have dedicated them to the god Odin.’

Arguing from the foundation that he did, it is not an entirely unreasonable attitude

Even if the fantastic invention of “death runes” did not plague runology long, it had already set the tone of the discussion. The interpretation by Verelius may seem arbitrary and flamboyant, but we need to remember that he had very little reason not to identify asi with the áss Odin. You could criticize Verelius for his misreading, but all in all this is not such a bad job as one might think. Above all, he thought he had good reason to assume the frequent existence of pagan runestones; arguing from the foundation that he did, it is not an entirely unreasonable attitude.

The reading presented by Olaus Rudbeckius ca. 1679 only deviated from the now current by a single rune of no consequence. Unfortunately, instead of the god Odin Rudbeckius came up with the goddess Isis! The translation was founded, of course, on his megalomaniac views of Sweden’s magnificent past, where not only the Garden of Eden was situated there but also the origin of civilization. He did not, however, completely lack a foundation for assuming that Isis could appear on a Swedish runestone as the Roman historian Tacitus claims that she was worshipped by our ancestors.

Before condemning Rudbeckius out of hand, we must also remember that he no more than Verelius had any firm grasp of what kind of pantheon one might expect to appear on runestones. Nor did any of them know how runestones were to be dated. At the time it was established science to believe that the earth was as old as the Bible claimed, only some six thousand years.

In 1730 Olaus Celsius Sr. published his ground-breaking investigation in which he proves that various types of prayers on runestones cannot refer to pagan deities but only to Christian. Generally considered an outstanding runologist, Celsius inspected the Salmunge stone himself in 1728, but does not in this case live up to his reputation as the runes are now taken by him to mean ‘tolerated by the good Jesus’. This was supported by N. R. Brocman in 1762 who states that even though runes were abolished elsewhere they were not in Sweden, and that the inscription here declared that ‘Jesus, who was a true God, tolerated them, and that through the inscription of them [= the runes] on the memorial stones of good Christians in no way offended against his majesty or creed’.

Ihre still accepts the presence of Jesus, however

The most important collected contribution to the understanding of the Salmunge inscription, however, was made by the great linguist Johan Ihre not far later. In 1769 he establishes that þuliʀ is a name and that what we read as iuk means ‘carved’. He still accepts the presence of Jesus, however. The sequence isi kuþ was only decoded over a century later, but this was ignored by Scandinavian runologists who suggested various incredible interpretations which would take too long to account for.

Wessén devotes an unusually long article in Upplands runinskrifter to the Salmunge stone. Previous interpretations get as much as a third of the space but are not discussed critically. This is because he cares little for the inscription or its carver and cannot be bothered even to try understand the text. (For details of his reasoning, see my article Rune-stone Inscriptions and Queer Theory, p. 7 ff.)

It is quite clear that the inability of older runologists to fully understand the contents of the Salmunge inscription affected Wessén’s expectations of making out its sense. He had decided that the Salmunge stone was “deviant” and hence not necessarily a true memorial with an interpretable meaning. The earlier misinterpretations had so to say squared the pitch. The many fanciful suggestions probable affected Wessén more than he knew. The rejection of the wild translations, the neglect of some sources altogether or the suggestions therein made him overlook any possible virtues interspersed among them. This disrespect for older runology made him miss details that are indeed valuable and his mistrust also severely affected subsequent runological treatment of the Salmunge stone, what little there is. Recent runologists have all shared Wessén’s negative attitude.

The solution was put forth by George Stephens, generally considered to be a runic dilettante

The tragic thing is that Wessén could have deciphered the text by simply reviewing earlier research with a more impartial attitude, or at least a more interested one. The evidence was in effect all there, already. Even the end isi kuþ had been unraveled almost a century before, but by a scholar of such ill repute that Wessén only included a reference to him in the bibliography but did not account for the suggested solution. That was put forth by George Stephens (1813–1895), generally considered to be a runic dilettante. But “even a blind pig can find an acorn once in a while”, as they say. Stephens interprets isi kuþ as Se Guð meaning ‘May God see/bless him’, a most fitting prayer known from Middle English sources (and from a medieval Norwegian inscription, N B13: ‘May God see me and bless me’).

A decade ago I published an article with a full interpretation of the Salmunge stone (Rune-stone Inscriptions and Queer Theory, p. 7 ff.): “Jobjörn and Änne erected the stone in memory of Erbjörn, their father. Tule cut these runes. May God see (him).”

The history of the Salmunge runestone proves that all runic inscriptions deserve our full attention and that even disdained runestones may provide valuable information about the Viking Age, in this case a unique prayer that gives us new insights into Sweden’s missionary times. It may not be quite as exciting as the presence of Odin, Isis or even Jesus but, as always, the truth shall set us free. 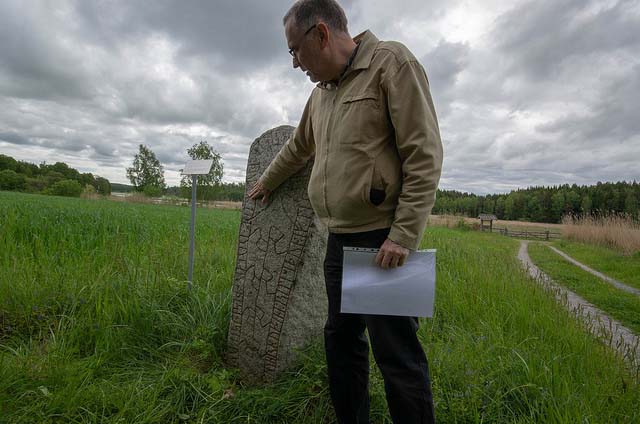