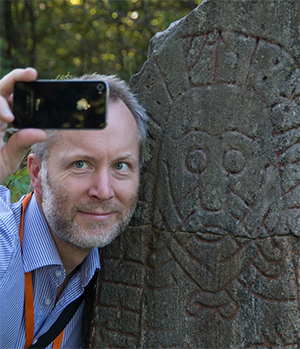 Earlier this month, on November 9th, Jonas Nordby successfully defended his doctoral dissertation in Oslo: Cryptic runes: Cryptography in runic inscriptions from the Viking Age and the Scandinavian Middle Ages. I post this blog to honor his completion of a long-term project on a most complex topic.

Cryptic runes (Norw. lønnruner) are related to cipher runes. The former are not necessarily possible to decipher, nor were they perhaps always intended to be. In 2002 Mindy MacLeod published her valuable dissertation Bind-Runes: An Investigation of Ligatures in Runic Epigraphy. Some of these ligatured characters are certainly cryptic, and she continued to study the subject in her conference paper Ligatures in Early Runic and Roman Inscriptions (pdf).

Cipher runes, on the other hand, I take to mean encoded messages with a runic background. Most of these are based on the fact that the rune-row (the futhark or futhorc) was divided into three groups. They were then put in reverse order: tbmlʀ hnias fuþork. By naming the group and the position of a rune within the group, encrypted messages were created. The sequence 3:5-3:2-2:2-2:4-1:5, for example, spells out runaʀ ‘runes’. Then it’s only a question of how to represent this. 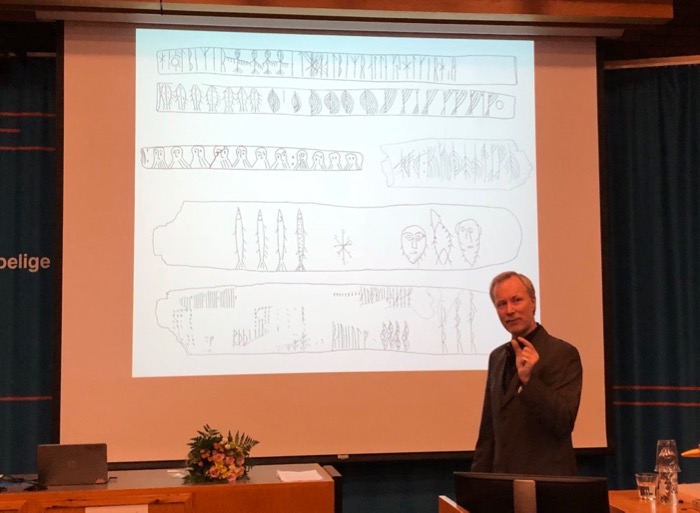 Jonas demonstrates some of the ways to represent binary runes. Photo: Marco Bianchi (CC BY).

One way was to mark the groups by long strokes and the positions by short. This is called the isruna system, since the long strokes look like i-runes (called íss ‘ice’). They were in use at least since the 9th century and are extent on the Rotbrunna stone (U 1165). Here the carver Eric has signed the inscription with airikr in ice runes. 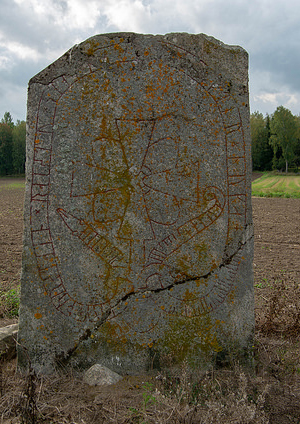 The Rotbrunna runestone (U 1165) with an isruna-cipher in the bottom right part of the runic band. Photo: Marco Bianchi (CC BY).

There are many other systems, too numerous to name here, but possible to group together under “twig runes”. They can consist of fins on fish figures, hairs in a beard or simply twigs with different orientation on a line. The Rök stone (Ög 136) has examples of this. It also uses older-type runes as one encoding method and “shift runes” as another, whereby each rune is replaced with the one following in the futhark order.

Why cipher runes at all? Especially in medieval times it’s clear that they were mainly used for entertainment purposes but, as Jonas Nordby argues, also for education purposes. Learning the futhark order is enjoyable if you play around with it. There are however other encryption techniques available, and Jonas Nordby has been the discoverer of at least two.

One system consists of reading an inscription one way and then turning it upside-down to read it the other. Jonas visualises this in a short video on his Instagram-account (see below) and explains it fully in his article on the topic of ‘read this if you can’. Since Jonas’s discovery Magnus Källström has detected further examples of this practice, the most entertaining of which consisting in the message aul kut ‘good beer’; see his article Gott öl i Sigtuna (pdf with an English summary).

Another, seemingly quite useless, is called jǫtunvillur. This was only known from late Icelandic manuscripts until Jonas found examples from medieval Norway. Documents from the Middle Ages in Britain and on the Continent give valuable information on runic lore, including cipher runes. Aya Van Renterghem’s recent dissertation The written rune: alphabets and rune-rows in medieval manuscripts from the continent and the British Isles clearly demonstrates this.

Amusement is not the only reason to use cipher runes. You can do it to hide a secret message, for example. As Marco Bianchi showed in his important dissertation Runes as a resource: Viking Age written culture in Uppland and Södermanland, another reason can be status. The use of different writing systems, including cipher runes, is a resource to challenge your readers or to enhance the inscription’s aesthetic value.

Runes are always a lot of fun, even when hard to decipher. That merriment has clearly been a factor in runic tradition for over a millennium.

Play the video for some runic fun