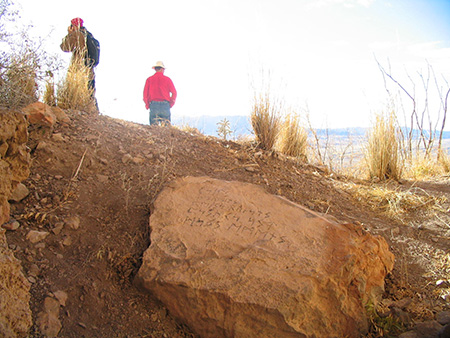 This is a short version of my pre-publication draft with the same title: Arizona runestone carved in phony Old Baltic (pdf)

In southern Arizona, some 30 miles north of the Mexican border, lie the Mustang Mountains. Around 2010 two climbers found a cave with a number of Native American petroglyphs and pictographs as well as a sizeable rock bearing a runic inscription. One of the finders contacted Scott Wolter, host of the television series America Unearthed, and an episode was devoted to the runestone.

In the episode, “Medieval Desert Mystery” (first aired on December 28, 2012) Scott Wolter suggests that the runes “might be Anglo-Saxon”. He takes a picture with his cell phone and sends to Mike (Carr), a person “who knows a lot about runes”. We are presented with a translation by Carr of the inscription and are told that “we know for sure that it’s twelfth century English”. Its startling message would be: “The body (in contrast with the soul) fits/lays Rough Hurech here. He enjoyed (entertainment, joy, merriment) – the secret stolen. Rough Hurech’s body – fame and glory. Dust beyond Eden – Eden’s temple”.

Carr also traces “the Hurech surname to medieval Staffordshire, England” and advises Wolter to visit the Gila Cliff Dwellings in New Mexico for a possible connection. After a brief visit to these late 13th century Native American (Mogollon) habitations Wolter heads off to the rock houses at Kinver Edge in Staffordshire. There he meets a friend who has information about a Peter Hurech who, he surmises, is the same person as Rough Hurech in Arizona. The building technique of the New Mexico and Staffordshire rock structures is then declared similar, and Wolter asks: “Did Hurech bring it [= the architecture] over there and educate the natives”?

The records on Peter Hurech stop around AD 1200, and it is deduced that he then left for Arizona to look in secret for lead, silver and copper, resources he was not anxious to share and hence the lack of any further records of his exploits.

Wolter concludes: “It seems to me we have a very compelling case that’s coming together here: This man came over to America prior to Christopher Columbus, and this would be just another example of the many examples that I’m aware of cultures coming to North America prior to 1492”.

The probability of a 12th century Englishman being buried in Arizona has been widely questioned and counter-arguments advanced, many based on logic or history. The runic inscription is also seen as problematic, as is the language therein. The runes can for the most part be identified quite easily: 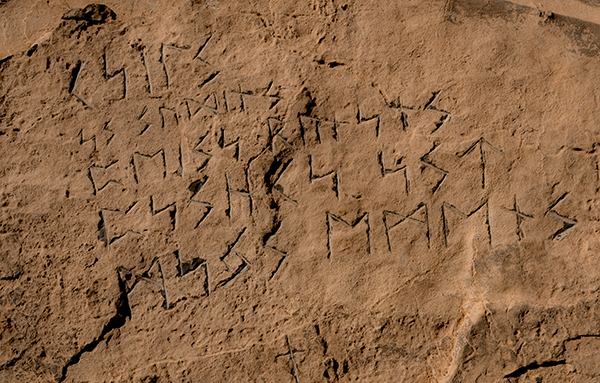 I am familiar with a number of languages, but none resembling the writing on the Mustang Mountain Cave Stone. There are, however, between 3000 and 6000 languages or major dialects in the world, and no one would recognize them all. This is where the Internet comes in handy.

Hello! I the Sudovian write runes. Pashka is my name

The site Virdainas turned out to be a gold mine. It contains information on Sudovian, a now dead language once spoken in an area of today’s Lithuania and Poland. Through the word lists supplied on the homepage, it was easy to translate the runic message: ‘Hello! I the Sudovian write runes. Pashka is my name.’

We may thus forget about the 12th century Englishman and his putative expedition to America. But are we then instead to believe that a Sudovian made the same journey in some distant past? The answer is no, and the final piece of the puzzle falls in place when one notices the name of the website’s author, Joseph Pashka, who lived near the cave from 1987 to 2001. Pashka told me that the inscription is from ca. 1993 but denies being its carver. The important thing is that we know what it says and that it has nothing to do with Old English or Peter Hurech.

Runologically, this is a closed case

Runologically, this is a closed case. It is conclusively proven that the inscription on the Mustang Mountain Cave Stone was carved by a nearby resident not long ago and not written in eight hundred years old English. The speculations on “Medieval Desert Mystery” are all debunked.

But isn’t everyone allowed to make mistakes and aren’t the theories all in good fun? There are two reasons why this kind of program cannot be regarded as quite so innocent. Even serious scientists sometimes commit honest mistakes, and America Unearthed is clearly more about entertainment than science, but the series does claim that Scott Wolter uses “hard science” and “what Wolter unearths continues to prove there are plenty of secrets buried in America’s past”. Elementary competence in reading runes is obviously not considered as hard science. When does entertainment with a claimed scientific basis become simply deceitful?